"THE HELP" a timeless story about the ability to create change. REVIEW

SUPER-STAR MARY J. BLIGE RECORDS ORIGINAL SONG
FOR DREAMWORKS PICTURES AND PARTICIPANT MEDIA’S “THE HELP”
BURBANK, Calif. (May 26, 2011) —DreamWorks Pictures and Geffen Records announced today that multiple Grammy® Award–winning recording artist Mary J. Blige wrote and recorded an original song for the soundtrack of DreamWorks Pictures and Participant Media’s THE HELP, a film based on the New York Times best-selling novel of the same name, opening in theaters August 12, 2011. “The Help” soundtrack - music from the Motion picture, will feature the original song from Mary J Blige “The Living Proof.”  The soundtrack, from Interscope Records, will be available Tuesday, July 26 at select Starbucks locations.
The song, “The Living Proof,” was written and recorded by Blige especially for THE HELP after she saw a screening of the film, which takes place in 1960s-era Mississippi and chronicles the journey of three very different women who come together and embark on a secret writing project that breaks societal rules and puts them all at risk. “The beautiful thing about these women is that they were very smart,” says Blige. “They chose to walk in love and forgiveness.”
The film really celebrates the courage to inspire change, “To speak to so many women with this song means a lot to me” says Blige. “I wanted to be involved with this film, because I think we need to encourage each other more, we are here to tell a story.”
Blige has received 9 Grammy® Awards and four American Music Awards as well as recorded eight multi-platinum albums. Mary J. Blige has sold over 50 million albums worldwide and her next album "My Life Too....The Journey Continues" will be released Sept 20, 2011.
The Help – Mary J. Blige “The Living Proof” VNR
ABOUT THE MOVIE:
Based on one of the most talked about books in years and a #1 New York Times best-selling phenomenon,  “The Help” stars Emma Stone (“Easy A”) as Skeeter, Academy Award®–nominated Viola Davis (“Doubt”) as Aibileen and Octavia Spencer as Minny—three very different, extraordinary women in Mississippi during the 1960s,  who build an unlikely friendship around a secret writing project that breaks societal rules and puts them all at risk. From their improbable alliance a remarkable sisterhood emerges, instilling all of them with the courage to transcend the lines that define them, and the realization that sometimes those lines are made to be crossed—even if it means bringing everyone in town face-to-face with the changing times. Deeply moving, filled with poignancy, humor and hope, “The Help” is a timeless and universal story about the ability to create change.
From DreamWorks Pictures and Participant Media, “The Help” is directed by Tate Taylor and produced by Brunson Green, Chris Columbus and Michael Barnathan, based on the novel by Kathryn Stockett, with screenplay by Tate Taylor. “The Help” releases in theaters August 12, 2011. 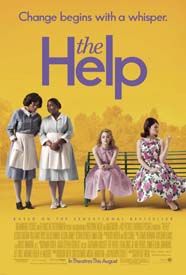 Posted by XmasDolly at 8:02 PM

Great review of the movie although I'm not a huge fan of Mary J. Blige, the movie looks quite interesting.

This is SO exciting! I did not realise they were making a film of this. I have the book on my bedside table, ready to read. Now I am definitely going to bump it up and read it before the film is released.