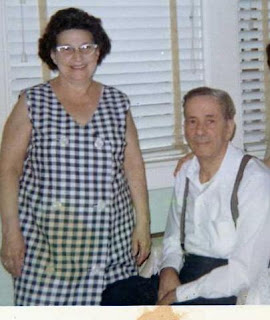 So, remember when I told you about my Grandfather who  made wine in the basement, and once a year it smelled like dirty old socks in the house?   My grandfather was born in Palermo, Sicily. When he came to this country with his bride he brought the family recipe for wine with him, and he made his Italian nectar in the basement, and this lovely lady, my Grandma helped him along with his children (see below).  Grandpa made the kids drink his wine.  "Good for the blood", he use to say.  This wine was soooo strong, but evidently he loved it, but my Gramma would sneak a little 7up in the glass for the kids so we could bare the overpowering taste, and still be in Grandpa's favors. 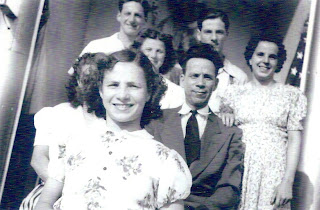 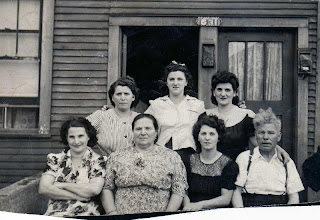 In fact, this is the house they lived in Chicago called Bridgeport for many years.  My grandmother is sitting down on the left, and great grandpa is on the right who also helped Grandpa make the wine in the basement.  Above is the whole family. 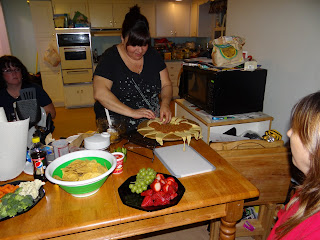 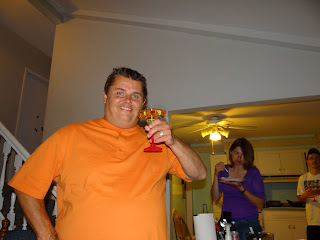 Now, flipFlop wine that I told you about before has that same taste of originality.  Yes, I finally figured out the word I've been looking for.  Originality.  In fact, I like this wine so much that I served it at my daughters party demonstration the other day, and boy look at some of these happy faces.
. 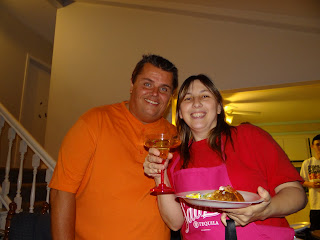 Chardonnay was the one that I brought with, and everyone raved about its mellow taste, and no bitter flavor.  Now everyone knows Chardonnay, and I got remarks like this isn't Chardonnay! So, I showed them the bottle.  Medium-bodied, Chardonnay with pineapple, soft vanilla and a long lingering finish.  mmm  As Papa use to say, "Ummmmm" that's when the wine was good and ready!

Cabernet Sauvignon:  Full-bodied, Cabernet Sauvignon with blackberry fruit, dark cherries and a long, lingering finish.  In fact, at the flipflop website it defines the wine, and when to serve it.  Tonight steak & mushrooms here. Cabernet Sauvignow is full of Black Pepper notes, and berry aromas.  It states to serve this wine with NY strip steak, spinach ravioli or Portobello mushrooms.  Okay, I'm not only thirsty now I'm hungry!

Anyway, coming from an Italian family and hearing all the stories of yesteryear it makes me wonder if I'm born in the wrong era.   Now, apparently David Georges who was working on a organic vegetable farm learned the art of growing grapes.   He planted a small vineyard on the farm, and instantly became fascinated with wine.  He furthered his education at the University of California at Davis first to study viticulture (grape growing), and then decided to also study enology (winemaking) as well. 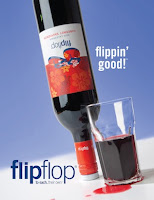 In 2009, David began working on wines that would become the inaugural vintage for flipflop, the newest brand in the Underdog Wine Merchants portfolio, and as they say these are just good wines that complement the everyday casual lifestyle.  Georges' goal was to stay true to the varietal character, to be expressive, and to be well-balanced, and be affordable for people of all economic levels.  Many levels of aged wine are just totally unaffordable, but so delicious.  David Georges brought the unaffordable to the casual lifestyle.  His wine has also won numerous awards.  Check out the list at his website.  David Georges brought an affordable delicious wine to us. 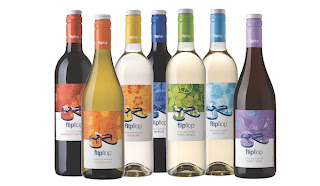 So, that's it.  I hope I didn't make your mouth water too much, but as my grandpa use to say, "Wine is just Nectar of the gods".  Flipflop is a wine where they put flavors, sweetness, mildness and a touch of love & only $7 a bottle.  As the gentleman said, "To each, their own".   Salute!


Short and sweet....
A woman was sipping on a glass of FlipFlop wine, while sitting on the patio with her husband.

She says, "I love you so much, I don't know how I could ever live without you"

Her husband asks, "Is that you, or the wine talking?"

She replies, "It's me...talking to my FlipFlop wine."

Posted by XmasDolly at 4:30 PM

your parties always look so fun. wish I lived closer. love the joke at the bottom.~Faythe @GMT

Too cute - love the quote! Looks like a great party! I'll be stopping by on Monday for the music :-)

And how come I wasn't invited? ~haha
This fella sounds like he's really for the people, and not out to make the almighty buck. I remember the last Post you did on this you said it was $7 bucks a bottle. Super reasonable for a tasty wine I'd say. Thanks for sharing your family story, and more info on the wine. FlipFlop wonder where he got that name from or rather why did he name it that? hmmmm

I'm with Faythe, I wish I lived closer... I'd be at your parties all the time and drinking your wine. HUGGLES!