Disney's Into the Woods Announcement 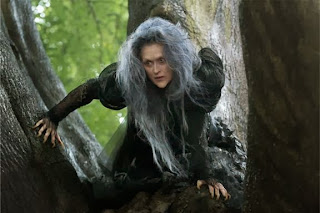 Meryl Streep as a witch in Disney's new "Into the Woods"

Meryl Streep creeps “Into the Woods” as a Witch who tries to reverse a curse, so that the beauty she once had may be restored. The humorous and heartfelt musical, a modern twist on the beloved Brothers Grimm fairy tales, explores the consequences of the quests of Cinderella, Little Red Riding Hood, Jack and the Beanstalk and Rapunzel—all tied together by an original story involving a baker and his wife, and the witch who cast a spell on them. In theaters Dec. 25, 2014.  Holy crap this is gonna be good!  Oooops sorry!  I guess the thought kind of ran away with me didn't it.  lol

I wanted to share with you the exciting news that Walt Disney Studios is turning INTO THE WOODS into a movie with an all-star ensemble cast including Johnny Depp (he's so fine), Meryl Streep (I always loved her ever since I seen her in Mama Mia. Fabulous Actress), Chris Pine, Emily Blunt, Anna Kendrick and more! It just went into production not that long ago so there's only a few images!

INTO THE WOODS opens in theaters December 25th 2014!