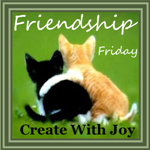 Question Of The Week:

This Week’s Theme
The Miracle Of Christmas
What represents the Miracle of Christmas to you?
Is it a song – a tradition – a childhood memory – a story?
The birth of Our Lord, Jesus Christ.  The Blessed Mother Mary & St. Joseph.  The shepherds that followed.  The star in Bethlehem, and the Three Kings that came to adore him baring gifts.

"In Hawaii, Aloha Friday a day of rest. So on Fridays we're taking it easy! Our hostess is asking a simple question & we answer; nothing requires a lengthy response. If you’d  like to participate, just post your own question on your blog & leave your link at the very friendly place of Islandlife808.com. Don’t forget to visit the other participants! It’s a great way to make new bloggy friends & new followers!

Tonight this happened to my husband and I and this girl was acting like a teenager although she is 52 yrs. of age.  I say "GIVE ME A FREAKIN' BREAK HERE"!  I told her that I wasn't part of her "flock" as she put it & she said I wasn't loyal to her because we were still friends with him on facebook.  So I promptly stated no one tells me who to be friends with and who not too!  Well, too much drama for me & promptly stated I was done & defriended her!  Some people really need to get a life!

LOL  I wanted to know what time zone the Myan's were in!!!  Central? Pacific? or Eastern Standard!!!   lmao  Have a great weekend everyone!!!

Don't forget to check out my give-aways & reviews! Also, check to see if you're following me if not and you do let me know I return every follow.   Have a great weekend my friends!  HAPPY HOLIDAYS!!

I guess my loyalty would lie with whomever I was friends with first to determine who I'd still be friends with. Unless I met them both at the same time and became friends, then it'd be determined by whichever one was the instigator of bad will - of course there's always 3 sides to every story: both sides and the truth! :)

I was wondering what time the Mayans were thinking the world would come to an end - for all we know, it's at 21:00 hours, which is 9pm tonight...but which time zone?? :)

Thanks for being so loyal and stopping by, Marie - and for the heads up the linky wasn't working. Since the newest Wordpress upgrade it's been acting funky. :( I've got your back, though - I added your link! :)

Have a great weekend! :)

I'm glad the world didn't come to an end! But I wasn't really that worried! Mele Kalikimaka!

Aww, sorry you've put put between a rock and a hard place. We've been through it, it's no fun.

Stacy's comment is funny about the time zone. I didn't even think of that. Hope it doesn't happen during our holiday party!

Ahh those babies grow up so fast eh!

Aloha Q: No. We are adults, just because so and so broke up doesn't mean I need to stop being friends with them. Unless I felt they were just dastardly and I couldn't stand them before but was only friends because of my girlfriend etc.

We are adults. Not children.

Real cute picture! It is always good to look back on pictures taken years ago and remember those days. It was really a difficult situation that you were faced with. It is not nice to be forced to make a specific decision. You are right to make up your own mind. The world has not ended in Jamaica as yet but I guess we have to wait until December 21 is really over!LOL Happy Holidays!

Recently, two friends of Jake and mine who had been together for quite sometime (3 1/2 years) broke it off; they were our only 'couple friends' and the tricky part was the girl was my best friend and the guy was Jake's. Not to mention my best friend introduced me to Jake o.O

It's still a little rough going, but thankfully nothing that petty has gone down and it hasn't come between us or our relationship.

It's just sad when these things happen and even sadder when people go to these extends!