FLASH!  NOW IN NEW PICTURES OF THE SNOWSTORM IN ILLINOIS GOING ON AS WE SPEAK!  PEOPLE ARE STARTING TO COME OUT OF THEIR HOUSES TO TRY, AND DIG THEMSELVES OUT.  THERE IS NO TRAFFIC ON THE STREETS!  FLASH!  ONE PLOW TRUCK JUST WENT DOWN OUR STREET SINCE YESTERDAY WHEN THIS BLIZZARD STARTED!

We are snowed-in in Batavia, Illinois.  In case you don't know where that's at I'd say it's about 45/50 miles west of Chicago.  There's my car surrounded by snow, and snow drifts.  Don't think that will be moving any time soon.  If you can see Baby (our dog) has made a pathway to go do her business, but coming back I thought she was going to get stuck, but she made it.  All though she looked like a Polar bear, but she shook it off faster then I could get my camera because I was laughing to hard.  Poor thing! 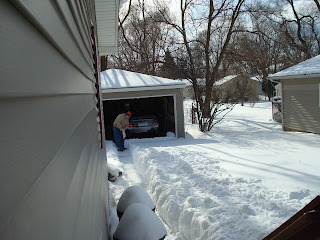 This was taken last night around midnight at the storms worst (as I thought at the time).  For the first time ever I actually heard thunder, and saw lightening DURING A SNOWSTORM?  I have never heard that before.  TOTALLY WEIRD! 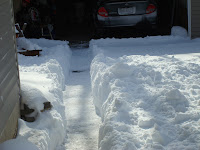 This video was taken last night: 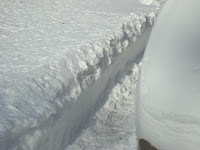 STAY TUNED FOR STATION IDENTIFICATION, BUT FIRST... FLASH!  A UP-TO-DATE VIDEO!  Video was taken this morning.  Our featured character, "Baby" (our Black Lab) just didn't know what to make of it! 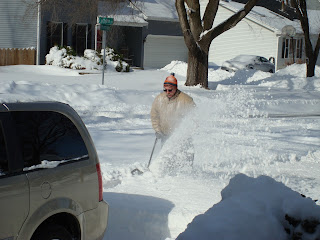 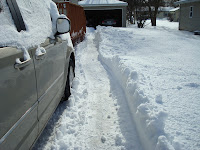 We will have an update of our news flash as it is received.

FLASH!  THIS JUST RECEIVED HOT OFF THE PORCH!
Our thermometer says 8 degress!  Brrrrrrrrrrrrr  Sure hope our cable doesn't go out again considering it's been off all day!
This News has been brought to you by XmasDolly, and her crew Dave from The Moody Mix.
We will now return to our regularly scheduled program, "Wordful Wednesday" (See below).  Thank you, but first a word from our Sponsors!  Ooops!  Seems there's a bit of technical difficulty.  That will be on tomorrow Post!
Posted by XmasDolly at 8:55 PM

Thanks for following Divine Chronicles (formerly Sweet Life) and I am returning the love.

BRRRRRRRRRR! you definitely got hit way harder than we did...stay inside where it's cozy!

Y'all are burried! Blessings jane

Yep, that sure was a lot of work. Below zero tonight. I froze my ... off today!

It's a crazy storm!
Even LA is affected.

Unbelievable that school is closed today and tomorrow!

I must say, I'm sort of jealous! We had a big storm last February, but we missed all this crazy winter weather going around right now. We got a bunch of boring rain, instead.

Snowstorms are so much fun (so long as I'm not out driving in them)!

These pics make me grateful to live in Florida! Following you back! Thanks for buzzing by my blog!
~Busy Buzzer
Buzzing the Day Away

Hi,
I know snow can be a pain but it looks so pretty, I really love it not that we get much here in the UK. Hope you have a lovely weekend.

You poor baby! You know I feel sorry for you. I keep telling you guys to move down here. :)

i love the pics, i can live through them... yall cuddle up and stay warm and cozy