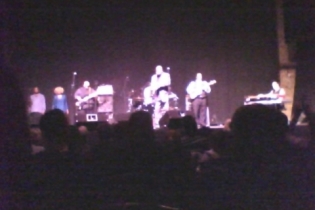 Hi everybody!  My husband and I decided to celebrate Valentines Day a little early, and he got us tickets to go see... THE ONE... THE ONLY... MACEO PARKER!  Now, I know you're gonna say who the hell is he (I did - lol)?  Well, he's a saxophone player that plays "FUNK", and he use to play with James Brown!  Unfortunately I forgot my camera at home & we were sitting really close too! I tried taking a few with my phone, and the only one I got is the one above.  Now we went to the fabulous Arcada theater.  Check it out.  I hope you enjoy a bit of my Valentine's present!  We loved it!  By the way, a big shout out to Mr. Ron Onesti for giving us a discount on our tickets, and all because of Mr. Michael Tassi who's a lead guitarist in the "Designated Riders"!  Hugs to both!

The Arcada Theater was built in 1926 by local millionaire and Chicago Tribune cartoonist Lester J. Norris. The new theater was a $500,000 example of the Norris family's confidence in the future of St. Charles . With only 5,000 residents in town, 1,009 seats were installed. A popular stop on the Vaudeville circuit, the Arcada was described in the St. Charles Chronicle in this quote: "There may be larger theatres in Chicago , but for beauty of auditorium and artistic stage setting, there are none superior to the Arcada of St. Charles."

Maceo Parker, a pioneer of funk, and saxophonist for the legendary James Brown, will perform Feb. 11 at Arcada Theatre.

On Friday,  Parker - who has performed and/or recorded with Ray Charles, James Taylor, the Dave Matthews Band and the Red Hot Chili Peppers - will bring his rhythm and blues, hip-hop, and jazz resonations to the Arcada Theatre in downtown St. Charles.

Ron Onesti, owner of the Arcada Theatre, said the saxophonist is iconic in R&B circles.

"This will definitely be one of those shows we have at the Arcada that people won't believe came to St. Charles.  It's almost impossible to separate which came first, Maceo or the funk," Onesti said. "His signature style as a tenor saxophonist grew to define James Brown's brand of funk for almost two decades. It's easy to see - and hear - why Maceo Parker is recognized as one of the early pioneers of modern funk and hop-hop."

"I was crazy about Ray Charles and all his band, and of course particularly the horn players," he said.

Parker was discovered by the legendary James Brown in the 1960s. For the past sixteen years, he has focused on building a new funk empire, fresh and stylistically diverse, which he describes as a navigation between James Brown's 1960's soul and George Clinton's 1970's freaky funk, with an exploration of mellower jazz and the grooves of hip-hop.

Since 1999, Parker has participated in some of Prince's groundbreaking tours. In 2003, after several years as band leader for the Rhythm and Blues Foundation Awards, Parker received a Pioneer Award from the Rhythm and Blues Foundation for his contribution as a sideman to the genre of R & B. Parker's albums Funk Overload , Dial M-A-C-E-O and Made by Maceo entered the top 40 in the European charts upon release.

Built in 1926 by Lester J. Norris, the Arcada became known as one of the outstanding vaudeville houses in the Chicago area.. Iconic stars to have graced the stage include George Burns and Gracie Allen, Edgar Bergen and Charlie McCarthy, The Little Rascals, Duke Ellington and so many other legendary stars.  In May of 2005, new life embraced the Arcada Theatre when Onesti Entertainment Corporation assumed ownership of theatre operations. As a producer of diverse and grand-scale entertainment experiences nationwide, OEC brought "Big City" shows to the western suburbs of Chicago. Toward that goal, more than $200,000 in renovations have included a new digital marquee, new dressing rooms, heating and cooling systems, paint, and upgrades to the sound system, lighting, stage and rest rooms. Mickey Rooney, Bret Michaels, Rick Springfield, Jerry Lewis and Martin Short are among recent headliners.

Posted by XmasDolly at 1:48 PM

What a terrific thing for Dave to do... sounds like a fabulous date. I know how much music means to the two of you.
Happy Valentine's day to you both... lots of kisses and hugs to you and to Baby!

Darn...Mrs. Moody...you definitely caught yourself a good one!!!! Hold on to him...matter of fact, I would chain him to the kitchen sink lol. Dave...you are such a wonderful husband to my friend Dolly!!! You are her sunshine!!!

What a fun Valentine present! The theater looks like a historical treasure!

Hi, Received your email so I popped over here to read a little well, I ended up reading it all. I Liked most the history about your theatre! I too liked James brown but remember specifics. How long have you been blogging? I started mine but so much goes wrong when I go from having it written and looking nice to publishing. Then sentences are all weird etc. Well you have a nice Valentines! Oh yes Tom asked me where I knew him from lol

No kids to worry about babysitters. I love it!

What an amazing present!!! You're such a lucky girl!