Our Lady of the New Millennium 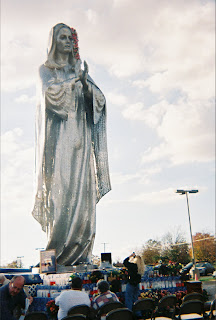 I was driving down the street one day on my way to go grocery shopping when the sun started to blind my eyes.  As I shielded them from the bright sun something started to shade me.  Whatever it was it isn't there usually.  Why it was in the church's parking lot.  "What are they building now?" I sighed, but then something started to come into view, and as my eyes focused I saw her.  My mouth hung open I immediately swung into the parking lot as if on a mission from God, and I was in awe.  I stopped right in the middle of the parking lot, and looked up.  I had NEVER seen anything so beautiful, so miraculous in my life.  I jumped back into my car and flew to the store to buy a camera.  I zoomed back, and started snapping like crazy.  Isn't she beautiful?  I felt like I've seen a miracle, and when I heard the story I was touched.

"Our Lady of the Millennium" was commissioned in 1995 by the late Carl Demma, a dedicated Catholic from Oak Lawn, Illinois whose lifelong dream was to build a statue devoted to the Virgin Mary for the city of Chicago.

In her book, "Our Lady of the New Millenium: One Man's Dream", Gail Jardine explains that he came up with the idea when he was only nine years old, after mistaking the statue on the top of the Chicago Board of Trade building for a statue of Mary. Upon learning that the statue was the Roman goddess of agriculture, he said, "Then I will build a statue so big that all of Chicago can see her!"

It was eventually built by the artist Charles Cropper Parks, along with his assistant, Matt Large. In 1999, it was blessed in St. Louis by Pope John Paul II.

Father Pat Marshall, the director and priest of the Newman Center, requested last spring that the statue be brought to UIC. He wanted it to be present on campus at the beginning of the school year. "A lot of people don't know that out of the 25,000 students at UIC, 15,000 of those students are from Catholic families," he explained. "We have more Catholic students than any Catholic or private university in the Midwest."

He said that he hopes that "it deepens the faith of Catholic students, and opens up a dialogue between believers and nonbelievers." He said that so far the presence of the statue has been "without controversy", and that the Newman Center has not received any complaints about the statue. He added, "For those that disagree with us, it's still a good thing. What a university is supposed to be is about dialogue." 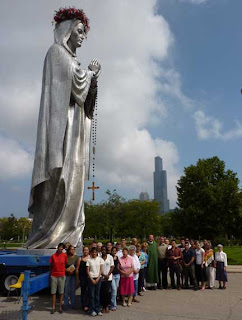 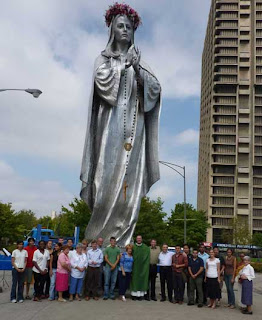 *All I know is the way she made me feel at that very moment, and for a very long time after that.  She's amazing, and I thought I could share that with you.

If you would like more information please visit:  http://www.jp2newman.org/content/view/149/822/
Posted by XmasDolly at 8:38 PM

Amazing is the right word!!! Wow!

Grandma and I saw her in Chicago Ridge, IL. A few years ago

I so wish I had my Camera she certainly is an amazing thing to see and the warmth that you feel when your in front of her is unsubscribing.

It is amazing the feat men can accomplish with making things. I remember visiting AR and seeing the huge one like this they had of Jesus. I kept wondering, what if it tumbled down in an earthquake or just give.

It's an amazing build!

That is just an amazing statue. It's nice to hear that there is really no controversy surrounding her. I am sure she is doing so much more good in the world.