MY FUTURE WAS A WRONG NUMBER! 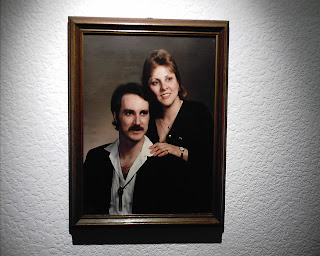 Yes, this is my husband and I back in September, 1991.  We were dating at the time, but how did it all begin.  Well, many of you had heard bits and pieces, and have been asking me to tell my story, so sit back, kick your shoes off while I tell you the story of the "Wrong Number"!

I was married for about eight years to my first husband. Let's just say he wasn't very nice, and call it a day. This story is a much happier one. In 1980, I was divorced, & became a single working Mom.  I was waitressing & scheduling my time around my kids schedule.  Waitress, bartending, cocktail waitress, cleaning homes, and selling toys wherever I could get work.  As time went on the kids were getting bigger, and we were just making ends meet, but we were happy & we were together.  My oldest daughter had gotten married, and I was in my middle 30's at the time and pushing 40.  I decided it was time to go back to school, and get a real job.  To cut the story some I got my G.E.D. & also got a degree as a legal assistant.  My cousin who worked as a legal secretary downtown told me about a job & I applied for it and got the job.  Woo Hoo I was on my way.

My cousin and I went back & forth to work together (she worked across the hall).  We also hung out together, and she wanted to fix me up with a blind date.  It was a Fourth of July party at our other cousin's bar.  Okay!  I don't do blind dates, but she talked me into it.  I did speak with him over the phone, so I was a tad excited, so I got the hair done & a new outfit.  So, we get there, & guess who was there?  BOWSER, from Sha Na Na!  He was funny & so cool!  I even got to dance with him.  Well, by now the evening is half over & guess what - NO DATE!  So, guess who went home a bit tipsy, and ticked off!  Yep, you guessed it.  MUUUWAHHHH!

The next morning my phone was ringing off the hook it was about eight a.m., and as I stumbled everywhere to find the phone, my head pounding, the phone ringing, wondering where the kids were & why weren't they answering the phone, so their mother could sleep.  I realized it wasn't the phone, but it was my beeper.  So, I picked it up and looked at the number.  Okay, half a sleep I see this number that looked similar to my blind date's number I call the number.   "HELLO", he said.  Well, I let into this guy like there was no tomorrow, and yelling about him standing me up, and yelling that he was calling me or paging me at eight in the morning on my day off... blah -- blah -- blah -- and then I heard, "Excuse me, but who is this?""  Then I heard is voice clearly, and I said, "Who's this?", and he said, "Dave".  I should insert here that that wasn't my blind date's name, it was Paul.  OMG what have I done!!!  I apologized over & over again, and he forgave me, and then the sweet guy apologized for men being so mean, and standing me up etc.  (Okay, everybody goes AWWWWWWWWWWWWWWWWW right here).

So, I thought the least I could do was to talk to the man if he wanted to talk, and we did.  We talked and talked and talked, and talked for about 3 1/2 hrs., but then we both had a Fourth of July picnics to go too.  During which he paged me, and paged me, and paged me.  Finally when I got home I did call him back.  We then talked until almost 3:00 a.m.  You see I had gotten a pager from my boss when I was working at the law firm, so he could reach me in the court house, and I had gotten Dave's drummer's old number because he had lost his pager.  My friends it was FATE! ~hehe~ Well, it took him about two & a half days to talk me into letting him meet me.  Come on!  I didn't know if he was some kind of serial killer or stone ugly with 3 eyeballs or weighed 500 lbs. & had dragon breath or what???  But he did sound awfully nice, and he did tell me he was a musician, and yes, he sang to me over the phone.  (insert another awwwwwwwwwww here).  Well, he came over, and I couldn't believe my eyes when he came to my front porch.  This man was HOT!  OH Lordy, be still my heart!!  And what did I say when I answered the door?  Can I help you?  Ahhh Geez, how dumb was that?  We went to the beach, & had a fantastic time.

On the way home we stopped at my cousins tavern for a glass of wine, and a tune came on the juke box.  Righteous Brothers, and he asked me to dance, and it became our song.  The rest is history.  Oh yes, one last note.  We dated for eight years.  I didn't get married again until my last child was married. I wasn't looking for a father for my children.  I was looking for a husband for me.  I hope you can understand that.  Actually Dave was a bachelor, no kids, and 42 yrs. old when we married a few days before Christmas in 1999.  We eloped, and that is the story of how we met.  My wrong number became my destiny, my happiness, and my Soul-mate.
Posted by XmasDolly at 10:34 PM

Most romantic story ever! What a great way to meet...just like in the movies!

It was SO meant to be. I absolutely love your story!

what a fabulous story! and i see we have a bit in common.

i, too was a legal assistand and worked in chicago. do i know you??? what law firm did you work for? i worked for Schiff Hardin before retiring and did a very short stint in the 90's at sonnenscein.

and i'm glad you found your prince charming! many more happy years i wish for you!

I just got chills reading this! It is so similar to how I met my husband - also began with a phone call and many hours. We are so lucky aren't we???

awwwwww double awwwwwwwww
how cute is this story!!!!
CMash

That was some story Dolly, but I believe in fate and your story proves it. Couldn't even jinx it going back to your cousin's bar...the last place I would have asked to be taken after being stood up there....but then again, it did all worked out for the best. Congratulations! You did good.
- Haupi

Oh WOW! that was a great love story! .. and he does sound great! Enjoy the rest of your lives together...

Can I still say awwww here? Because this just leaves me with a wide smile on my face.

I love your love story :)
Thanks for sharing.

This is a fantastic love story! (I won't say "aw" though simply because everyone else already did...)